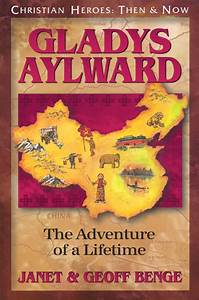 – She went to the shipyard and asked how much it would cost to go to China. She only had three shillings and they laughed at her. She began working to save up when someone told her that there was a retired missionary couple from China looking for a maid. She went to work for the couple and asked them to tell her stories of China and would borrow books about China. Finally the lady she worked for told her that there was a missionary widow that would not return from China even after she lost her husband. Gladys ask them to contact her and left for China to work for her. She traveled through Russia and treacherously was taken as a slave but she was saved in the nick of time. She literally jumped on a ship headed to Japan and acted as a British prisoner with the Japanese. When she arrived, they let her go and she headed to China.

– She finally arrived in China after many travel problems. Mrs. Lawson, the widow lady she went to work for, had been in China for 53 years. They worked together forming a hotel for travelers. After a while Mrs. Lawson unexpectedly died. Gladys did not know what to do but wanted to stay in China. How could she maintain and finance the hotel that her and Mrs. Lawson worked so well? She did not have the money and was scared.

– One day out of nowhere, the Mandarin, leader in charge of the whole area that had ultimate power, came by and visited Gladys. She was scared and did not know what was going on. The Mandarin told Gladys that laws had changed and every woman in the entire province was to quit binding their feet, a tradition used all over China for many many years. He said that men could not look at women’s feet, so he needed a woman to travel all over as a foot doctor and make sure that people quit binding women’s feet. He said the only woman in that area that could walk and did not have bound feet was Gladys, so she would work for him. He told her that she would travel all over with the guards from the Mandarin and speak on his behalf. She told him she was a Christian and would tell the women about God. He replied that she could do so if she wanted, and he would take care of all of the travels (expenses, guards and open doors). God had just opened the door, provided the protection, the provision and the authority. What an amazing God!

– At one time there was a riot in the prison and the prisoners were killing each other. The Mandarin asked Gladys if she would help. She did not understand how she could help, she was a woman, she knew nothing about prisons and she was scared. But she said she would, prayed and marched into the prison. Blood was everywhere and dead bodies were laying all over. Men were killing each other, but God gave her a boldness and she screamed “stop it”. The men all stopped and looked at her. She demanded that they come form a line. Ultimately, God used her to stop the prison riot. She later demanded that they get the prisoners jobs so they could have food and better clothing. Once again she saw God do miraculous things.

– She adopted orphan children. She stopped counting at 150 they still kept coming in.

– The Mandarin asked her to tear down a building that everybody was afraid to touch. They believed that a giant scorpion used to kill people and was trapped inside of that building so everyone was afraid to touch the building. Gladys gathered the Christians in the town to tear the building down. The Mandarin then asked Gladys to come to the palace for a feast. She went and there were a lot of people gathered there. At the end of the dinner, the Mandarin began to speak about all the things that Gladys had done for him and for the city. He then looked at her and said that he wanted to become a Christian. Once again, God performed another miracle in her life.

Jeff Bush became the General Director of Vision Baptist Mission in May 2012. Prior to this assignment the Bush family faithfully served the Lord for 8 years in Argentina, South America. During their time in Argentina, God blessed their efforts resulting in five churches, a radio ministry, and a Bible college to train those called to the ministry.