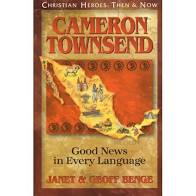 – Cameron and his friend were in the army and went to hear a lady missionary give her testimony at a church because they heard on base that she was pretty. After she finished teaching, she asked Cameron and his friend why they were not missionaries. Cameron told her that they were soldiers, so they couldn’t go to Guatemala as missionaries. She responded saying they were cowards for wanting to be a soldier in a war where millions of other soldiers were and leaving the multitudes around the world to be evangelized by single women. That comment burnt him so much that he later became a missionary.

– He asked God to help him learn the language and studied hard until he did.

– He was not afraid to talk to government officials. He told them he could help the indigenous people become better citizens by translating the Bible into their language.

– He prayed and recruited 50 people for translating the Bible into indigenous languages.

– He brought down new people when he did not have the money. Only 2 out of 10 new recruits had support and the government of Mexico told him that they would support the other 8 that were currently there because he was helping the indigenous people.

– He had a burden for indigenous people everywhere that did not have the Bible in their language, so he started the Wycliffe Bible Translation Society, naming it after Wycliffe (who translated the Bible into English).

– He started asking for pilots and a plane to reach people in more remote areas.

– He made a movie about what he does and got the word out — this was around 1947 so not cheap or accessible like today.

– He wanted to set up a booth in the world fair. It would cost $250,000 but he was given the space for free. Even though they received the space for free, it would still cost around $100,000 to make a booth. He was able to raise all the money and, although he was not as financially successful as he wanted, he got 200 new recruits, now a total of 1600 missionaries working under him. Over 1 million people entered their booth to see what they were doing and heard a talk about his goals with the mission.

– He wanted to reach every tribe and language with the Gospel in his generation.

– He was always looking for people and tribes that did not have the Gospel in their language. And he did not accept “impossible” when he was told he couldn’t do something.